The Alaska Bar Association Judge Nora Guinn award honors Alaska District Court Judge Nora Guinn of Bethel, who died July 6, 2005.  The award is presented to a person who has made an extraordinary or sustained effort to assist Alaska’s Bush residents, especially its Native population, and has overcome language and cultural barriers to obtaining justice through the legal system, a goal to which Judge Guinn was firmly committed throughout her long career as a judge and community activist.

The Board of Governors solicits nominations that are due by August 1, and should include a detailed description of the nominee’s contributions to Alaska Natives and other Bush community residents.

Please submit your nomination via an electronic form below or send your nomination form to the Alaska Bar Association, attn. Danielle Bailey, Executive Director, 840 K Street, Suite 100, Anchorage, AK 99501-3353 or e-mail to bailey@alaskabar.org. 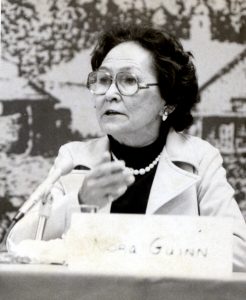 Born and raised in the village of Akiak in the Yukon-Kuskokwim Delta, Judge Guinn was the first Alaska Native judge in the state and one of the first women judges.  Judge Guinn was a magistrate in Bethel before being appointed by Governor Hickel as a district court judge.  She often conducted court proceedings in the Yupik language to foster better understanding of legal principles, and is credited with playing a major role in extending judicial services to Southwest Alaska and other rural areas of the state.  She was elected to the Bethel City Council and served on the boards of many organizations, including Calista Corporation, the Lower Kuskokwim School District, Orutsararmuit Native Council, Bethel Social Services, and Alaska Legal Services Corporation.

Listen to a clip of Judge Nora Guinn’s first proceeding as Bethel District Judge on April 1, 1968:

For an individual Alaskan who has made an extraordinary or sustained effort to assist Alaska’s rural residents, especially its Native population, overcome language and cultural barriers to obtaining justice through the legal system.